Stuck in Flaunta: Undoing the Self and Paying Attention 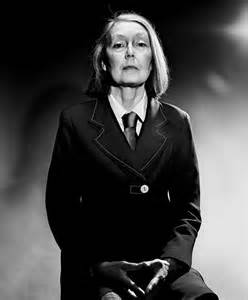 Canadian poet Anne Carson (b. 1950, pictured above) was in town recently, receiving a lifetime achievement award at the Blue Metropolis International Literary Festival. Strutting onto the stage in a fabulous pair of red cowgirl boots, she eschewed the usual litany of thanks and opted, instead, to lead us all in a participatory exercise in snappy story-telling. It was fun and she was funny: what more could a lit-fest audience turned pop-up Greek Chorus ask for? The answer: an interview with the inimitable Eleanor Wachtel. What followed was pure magic, and theatrical to boot: Wachtel wrangling her way through the prickly and unyielding scrublands of  Carson Country; the rest of us unflinching witnesses to this unnerving showdown between unflappable doggedness and insouciant erudition. Once, just once, Wachtel lost it. A persistent cell-phone ringing out through the auditorium broke her concentration - and this, just as she was finally getting Carson on side, reeling her in. Like tumbleweed, Carson was gone again: a free spirit refusing to be fenced in; a bit of mischief on the make. It was fascinating and just a tad unsettling, watching these two literary heavy-weights tussle their way through an interview which will, on May 8th, be broadcast on CBC Radio's Writers and Co. Fascinating, because who would have guessed that the radio interview format would make for such rich and compelling viewing. Unsettling, because Anne Carson just is.

But then, we already knew this - those of us who had entered Carson's world during the third session of this current series in order to gain a better understanding of another unsettling character: the philosopher and activist Simone Weil. And aren't unsettling folk just like that? You think you've done them, ticked them off, when suddenly, you're back to square one. That's how it felt, at any rate, when we dipped back into Weilian workings of the self with a view to moving shame-wards, and found ourselves up to the eyeballs in alligators. That "swampland of the soul" - Brene Brown speak for shame - would have to wait. This other quagmire into which we had unwittingly waded - the actual technicalities involved in "undoing the creature in us" so as to successfully "decreate" a la Weil - required our immediate attention. And so, spurred on by Carson's insight into how to go about actually paying attention - "Attention is a choice of where you put your mind...And looking at the object of your attention to the extent that you forget you're doing the looking" - we embarked on a series of exercises designed to both instruct us on the ins and outs of destroying the "I," and sharpen our skills in the attentiveness department.

Of course, there was a lot of preliminary discussion as to whether destroying the "I" was a desirable thing in the first place. In a sense, that Weilian notion of carving out a void in the space where the self normally resides goes counter to the rah-rah-be-your-biggest-and-best-self kind of rhetoric on offer in Self-Esteem for Dummies etc. In a culture where Self reigns Supreme, doing away with it is unnerving at best, terrifying at worst - even if this negation is, as Weil contends, a necessary move if one is to fully open oneself to Truth and Knowledge and Whatever Else Truly Matters. For the self gets in the way. Like a shadow, it blocks out the light. Like unwanted baggage, it weighs you down. , Like the elephant in the room, it takes up all the space. Clear the shadow, the baggage, the elephant, and you're starting to get somewhere. A strange way to go about getting to the bottom of self-esteem, perhaps. But it seemed to offer something in the way of getting more out of life, and so we bit. 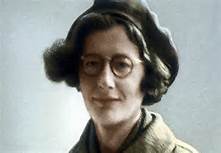 Simone Weil (pictured above) suffered from terrible migraines. She tried many ways of clearing them out of her head, but nothing seemed to work. One thing she knew for sure was that they got in the way of her being able to turn her full attention to what mattered. In April 1938 she found herself attending the Easter Mass at the Abbeye St-Pierre in Solesmes. She felt the Gregorian chanting of the monks enter her body, go straight to the space in her head filled with migraine. As the chanting poured in, her migraine did a peculiar thing: it emptied out. Soon, the space formerly known as migraine was awash with Gregorian Chant. It was a space rendered ready for paying attention: for "a patient holding in the mind," as Weil referred to the act of paying attention, which in turn would make thought itself "available, empty, penetrable by the object." This is a radical take on the role of thought in the life of the mind: not the light bulb switching on as it encounters its object, but rather, the necessary conditions for the object to come to light. In Weil's conception, thought must be suspended if the object of one's attention is to find its way in, gain a proper foothold. If thought is busy thinking, the object just passes it by. If thoughtfulness hasn't twinned itself up with attentiveness, the best we can hope for when it comes to thinking is a worrying - Weil would go so far as to say dangerous - mishmash of "partial attitudes."

That, at least, is the theory. We obviously needed to put ourselves in Weil's shoes to grasp what it felt like in practice. And so we experimented with filling our heads with the self-same Gregorian chants that had so impacted Weil, and making of the resulting void a luminous object-ready nesting ground. Yah, right. Weil, as I suggested earlier, was unsettling: not your average, run-of-the-mill, kind of gal. But we gave it a go, and then turned our attention to other aural stimuli: a metronome's steady tick-tocking, which brought the Weilian notion of time as "unvarying perpetuity" into the equation; a wind-up music box with its twirling ballerina and its ever-decelerating ditty, which prompted us to probe yet further how time, if invariably monotonous for Weil, could helpfully be categorized as either "time surpassed" - as in here comes the void, which is good monotonous - or as "time sterilized" - as in me just going round and round like "a squirrel turning it its cage" and never getting anywhere near the void, much less admitting to myself that I am going round and round (which for Weil is the worst sin of all, this kind of self-delusion) and which is, not surprisingly, bad monotonous.

This seemed as good a queue for a song as we were likely to get, so we broke out Anne Carson's Duet of What is a Question from her Weil-inspired opera in three parts, Decreation (2005), and gave it our valiant best. Improvising the vocal arrangements - Carson had only supplied the libretto - provided us with the perfect opportunity to pay attention to each other, and hone our deep listening skills. As for getting us closer to the void, we were still a little in the dark. Enter American poet Fanny Howe (b.1940, pictured below) and her beautifully observed prose poem, Doubt. If Baruch Spinoza is the physicists' philosopher, Simone Weil, it would seem, is the poets' philosopher. Though it is easy to understand why Weil speaks to poets like Carson and Howe, the writing that comes of their interest in her ideas and her personal narrative is as tantalizing and challenging as Weil herself. Sometimes. though, what poetry gives us that philosophy cannot is a line of such stark and heart-breaking beauty that knowing what the void, for example, actually is, or what it is to make one or find it or get there, no longer seems to matter. For a very brief moment, we just feel decreated - like the creature in us has unraveled, like we have completely come undone. No wonder, as Howe herself suggests, Weil would have loved to be a poet. And thank goodness, because she wasn't, there are poets like Anne Carson and Fanny Howe to step into the...void. 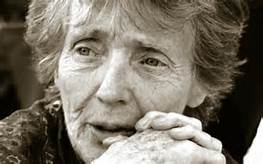