Afloat with "The Traveller" : Of Voyages, Ships and Seas 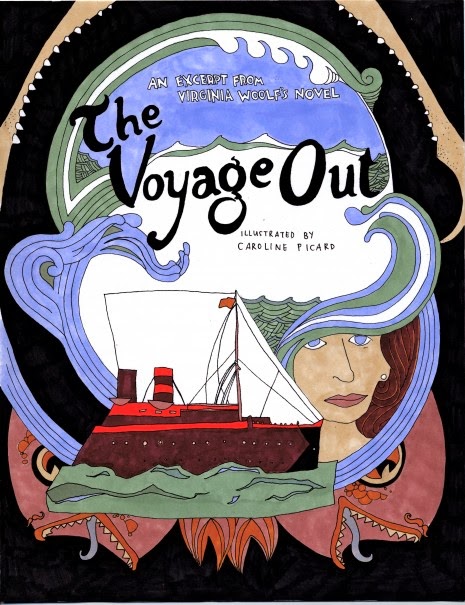 Last Thursday evening, a group of intrepid women with inquiring minds braved the icy cold weather front currently assailing Montreal to join us for the launch of our 2014 Winter/Spring Salon Series. Organized around the trope of The Traveller, each of the forthcoming sessions devoted to this archetypal figure will set her in motion through a specific travel-related action, which in turn is linked to a means and a medium for getting her (and us) from A to B. On this particular evening, the action that was keeping our minds alert and our armchair travelling bodies afloat was voyaging; the means a ship; and our medium of choice, the sea. Enter Virginia Woolf with her first novel, The Voyage Out (1915). Ten or so years in the making and endlessly revised even after its initial publication, what better way to set the scene for this latest wine women and philosophy escapade than Woolf's painstakingly crafted and exquisitely observed account of a young woman's voyage towards self-discovery. That the protagonist's rite of passage into the ways of society and the wiles of its most privileged players begins during a sea-passage between England and South America is no accident: metaphors - those stand-in 'carriers' of meaning that borrow their name from a method of transport in ancient Greece - figure prominently in Woolf's writing; even Woolf's chosen title, The Voyage Out, would go on to have a life beyond her novel, coming to mean the first or pivotal work of any author - the work upon which, metaphorically speaking, that author had cut her writerly teeth!

All to say that our own first voyage out in this series found us talking, in nautical terms, of many things -

- but also, in a somewhat more practical vein, navigating our way through a number of individual and group exercises designed to shed poetic light on the workings of metaphor and generate insight into the relationship between freedom and voyaging. As we did this work, the etymological powers-that-be were busily getting on with their own unpacking: revealing the roots of the word 'voyage' to lie in the actual provisions (like food and money) that one takes on a long and arduous and (frequently) perilous journey; leaving us somewhat 'at sea' - that is, in a state of uncertainty or perplexity - with their announcement that the 'glamour' we associate with those dashing transatlantic cruises of yesteryear is, in fact, a very close cousin of that dry and unbending stickler for rules, 'grammar.' Delving back to a time before 'glamour' and 'grammar' went their separate ways, we saw how their shared denotation of 'scholarly learning' connoted, in those medieval times, all the magic and enchantment and casting of spells that we today associate more with a glitzy on-board romance than with the present subjunctive.

Forsaking the exigencies of the latter in favour of pragmatist philosopher William James' (1842-1910) somewhat more alluring concept of 'corporeal grammar,' we considered the difference between our bodies at home and our bodies en voyage. From the moment we are born, James argued, our bodies become encoded by and conditioned to a specific habitat, creating within us a range of habitual corporeal responses, prompting us to become creatures of habit more likely to seek out those encounters between self and environment that are recurring, hence familiar, than unexpected, hence jarring. Over time, a kind of bodily grammar - complete with its prescribed associations and requisite rules - sets in. We become corporeally able and re-actively 'correct': at one with our environment just so long as that environment remains consistent, does not significantly change.

Which is precisely the point where vitalist phenomenologist and sensuous travel writer Alphonso Lingis (b. 1933) steps in: urging us to shake up that corporeal grammar of ours; suggesting that a voyage to foreign climes is the perfect way to get the ball rolling. Travel, as Lingis argues, "bursts our world wide-open". In the process, we not only begin to "see with new eyes" à la Marcel Proust. We also shatter those affective circuits of which our body has become composed, and through which the passé and composé of our respective corporeal grammars just seem to end up inevitably together. Not only are we discovering new landscapes as we voyage into the unfamiliar; our bodies themselves become new landscapes, jarred into a reconfigured topography as the shock of the unknown makes us anew. To Andre Gide's admonition that we cannot discover new oceans unless we have the courage to lose sight of the shore, we add gonzo journalist Hunter S. Thompson's insistence that, rather than arriving at our final destination in a "pretty and well preserved body," the proof of a life well lived lies in "skidding in broadside in a cloud of smoke, thoroughly used up, totally worn out, and loudly proclaiming: 'Wow! What a Ride!'" 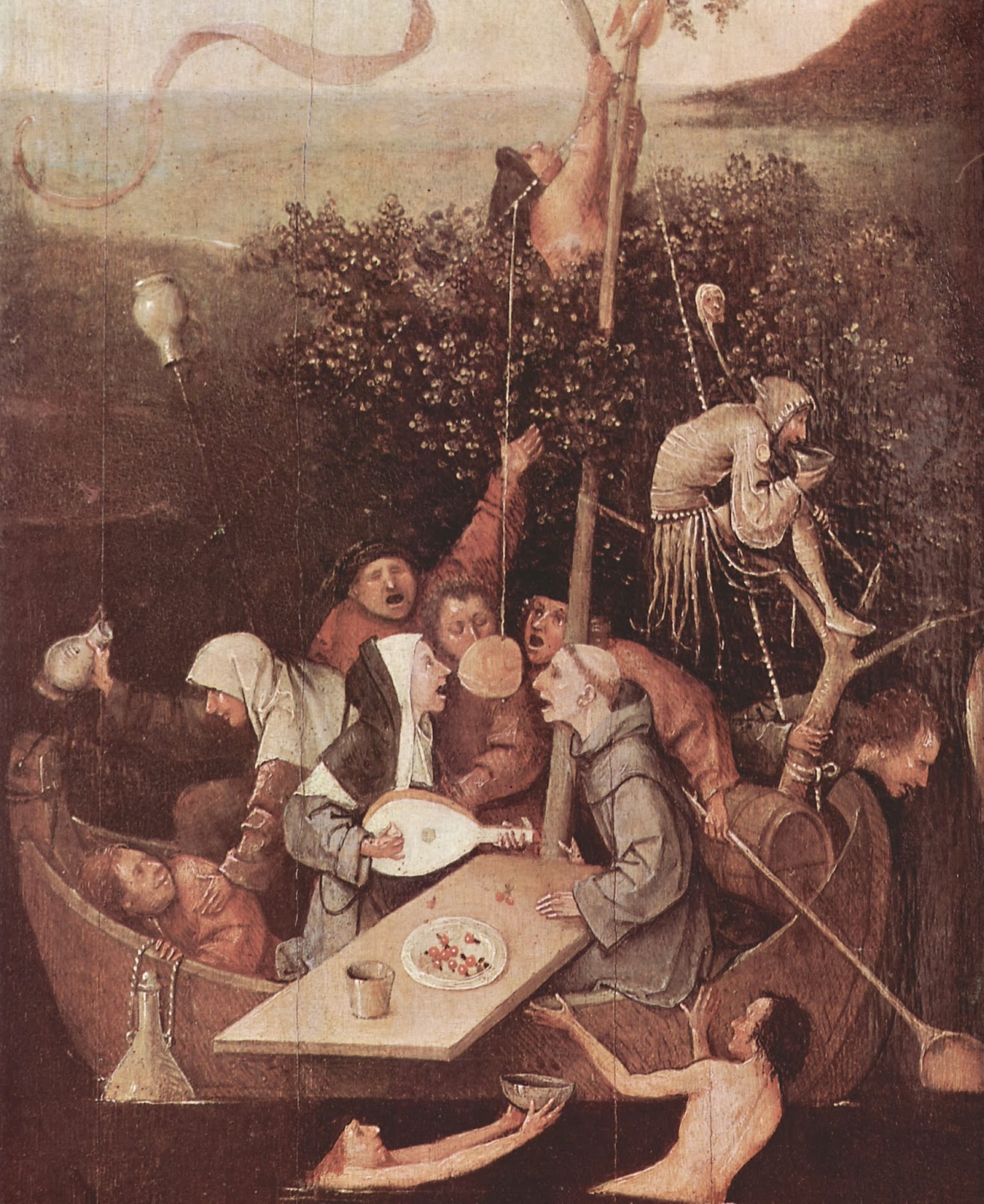 So much for the Proustian return voyage - that remembrance of things past as one dips one's Madeleine into a cup of herbal tea and takes a tentative bite. And so much for Aldous Huxley's Brave New World pronouncement that boredom, when it all comes down to it, is the ultimate symbol of the "true" traveller's liberty. As we sailed on through the evening's proceedings, it was becoming increasingly clear that the philosophical journey that lies ahead of us is rife with contradictions - a point brought all the more home to us as, in the closing minutes of our maiden voyage together, we cast a wayward glance at Katherine Anne Porter's 'voyage out' novel, Ship of Fools (1962). Bouncing off Sebastian Brant's 15th Century story, Das Narrenschiff, and deeply moved by Hieronymous Bosch's painting of that self-same Ship of Fools, Porter gathered material for her book during a 26 day sea voyage that she took in 1931 from Mexico to Germany. Comparing the rampant antisemitism she witnessed aboard the ship to the wildly speculative 'reasoning' that led European communities during the Renaissance to herd up those villagers deemed to be insane, and send them out to sea in a ship with other 'fools' so as to be forever rid of them, Porter's main point was that a vessel afloat in the ocean could be seen as a microcosm of humanity - the passengers no better, no worse, than the 'fools' left back on shore.

If this latter reflection provides a fitting segue into next session's exploration of the tensions between home and away, those taking part in this session were left in no doubt that travelling - whether physically or philosophically - is not for the faint of heart. All to say, we worked hard. But then, given 'travel''s etymological origins - travail, as in 'work', and before that, 'an instrument of torture' (!) - what else would you expect? Sincere thanks go out to our existing members for bringing their friends along to give wwp a trial run, and we welcome all those who will be joining us as new members in 2014.

Announcing our 2014 Winter/Spring Salon Series: All Aboard for "The Traveler" 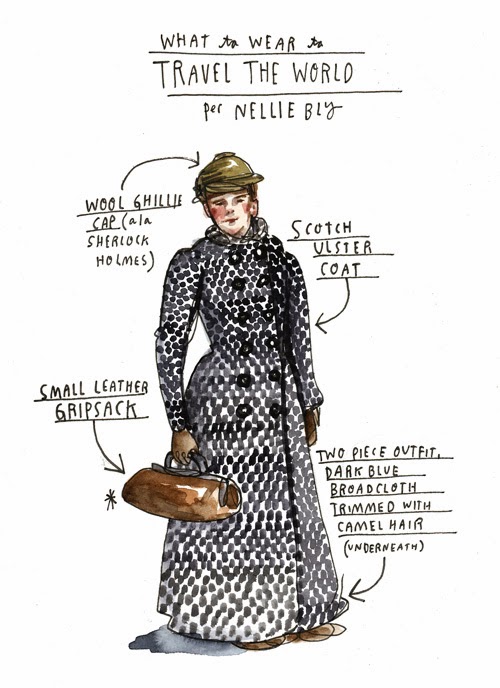 Happy New Year to all our members and friends!

We kick off our 6th salon series - yes, 6th! - on Thursday, January 23rd, at 7:30 pm. The series is organized around the theme of "The Traveler", and we'll be meeting 5 times between now and May to engage with this theme through a range of philosophical entry points. Sessions run from 7:30 pm - 10 pm, and each one stands alone - so you won't feel as if the boat has left without you if you have to miss a session here or there. There are no readings or homework, nothing to prepare or pack...Just hop on board and see where this latest wine women and philosophy adventure takes you. In terms of an itinerary, these are our ports of call and ETA:

Afloat : Thursday, January 23, 2014
Abroad : Thursday, February 13, 2014
Astray : Thursday, March 13, 2014
Alone : Thursday, April 17, 2014
Adrift : Thursday, May 1, 2014
Tropes to be explored while moored in each of these ports range from the Intrepid 19th Century Lady Traveler to the door-to-door ding-donging Avon Lady; from armchair journeying to shamanic journeying; from the art of the Parisian flaneur to singing the world into existence in the Australian outback; from slow travel to time travel to off-the-grid travel to just plain NO! to travel. Philosophical tour guides are far-flung, but include Walter Benjamin, Susan Sontag, Rebecca Solnit and Pico Iyer. Inspirational traveling companions consist of Freya Stark, Rosita Forbes, Virginia Woolf, Bruce Chatwin, Flora Annie Steel, among others.
You don't have to like travel to join us for the ride. But hopefully, you'll learn something interesting about yourself as a traveler if you decide to sign on for the long haul .
at 8:50 PM