Last Thursday - 336 years to the day of Baruch Spinoza's death from consumption at the age of 44 (February 21, 1677) - wine women and philosophy members came together to explore this unconventional philosopher's take on desire and its more bodily sidekick, appetite. Given that desire was central to Spinoza's metaphysical positing of a life lived freely, happily and ethically, the subject matter itself would seem a fitting choice with which to honour his life. That Spinoza's understanding of desire strays wildly from that of the majority of his Western Philosophical confreres renders the synchronicity downright uncanny.

For whereas desire for these latter is generally about what isn't there - a longing or a yearning for some object outside of us that we lack - Spinoza's desire is our very essence: the very life force of our life. And Spinoza went all out and celebrated this life force. Along with joy, there wasn't much more to life for Spinoza than this active and self-actualizing striving to be named desire. In fact, for Spinoza death was a far less worrying prospect than being alive but only passively so: devoid of desire, emptied of essence, just going through the motions, thinking other people's thoughts. To desire your own desiring, to think your own thinking - these were the active ingredients constituting 'the good life' for Spinoza. In other words, what better way to mark the end of Spinoza's life all these many years after the fact than to unpack the affect (life force) and essence (fundamental nature) that gave him life.

Desire, for Spinoza, is synonomous with conatus: a term explored over the course of our first two sessions in this series, and which is best understood as the endeavour of each person to persevere in her or his own being. We began the salon evening with a review of this term and other terms encountered on our Spinozian journey thus far: in part to bring those participants new to Spinoza up to date with our recent meanderings through his Ethics and Tractatus Theologico-Politicus; in part to get those who had been present at earlier sessions reflecting pace Nel Noddings on "what sticks" - the little bits of insight and information that do remain in our memory bank being akin to those burrs that just seem to attach themselves to your clothing as you make your way across a field. 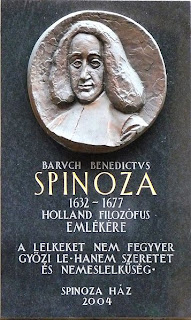 Pooling our Spinozian 'burrs' enabled us to collectively cobble together a fairly good picture of his philosophy as explored by the group to date, as well as to see how desire and appetite fit into it all as the evening proceeded. And here's the rub: in addition to getting closer to 'getting' Spinoza, the tide was also turning for Spinoza at an affective level. From an initial hostility towards this most rationalist of philosophers who used Euclidean geometry to ascertain the best route to ethical behaviour and for whom giving your passions free rein is to seriously curtail any chance you have of any real freedom, the crowd was definitely starting to soften towards him as round three hit the midway mark.

'I'm actually starting to like this guy," commented one of our regulars as we delved into Spinoza's refusal to assign values like 'good' and 'bad' to objects in and of themselves, but rather to see goodness (or badness) in the degree to which an individual's desire to affirm her moment in time and live it fully (ie. desiringly) is either increased (or diminished). Bringing Spinoza's greatest twentieth century supporter, post-structuralist philosopher Gilles Deleuze, into the conversation certainly helped to notch up those popularity points. You cannot throw around Spinoza-inspired Deleuzian terms like "Desiring Machines" and "Bodies without Organs"  and "Lines of Flight" of an evening and not feel a certain fondness for the man behind it all. Countering the self-negating and object-driven 'desire as absence' hypothesizing of classic psychoanalysis with Spinoza's self-reliant and self-generating 'desire as life' approach wasn't a bad way to get people on board with the man either. Hand a group of intelligent women a spirited challenge to Freud's Penis Envy or Oedipus Complex theories and you're bound to attract some fans.

It was an envigorating task, working desire through a Spinozian lens. As a society, we are so entrenched in the "desire as absence" mindset that it takes some good hard thinking to think it otherwise. This, one suspects, would have delighted Spinoza, as would our concerted efforts to build desiring 'assemblages' of Christmas baubles, cribbage boards, and various other nuts and bolts. Thank you to all those who took part...We just relished your good grace and gusto. Next time - Thursday, March 21 - we'll be looking at Spinoza's understanding of Perfection. All you perfectionists...Time to start preparing right now!
at 4:08 PM